Time to Be Brave - MetroFamily Magazine 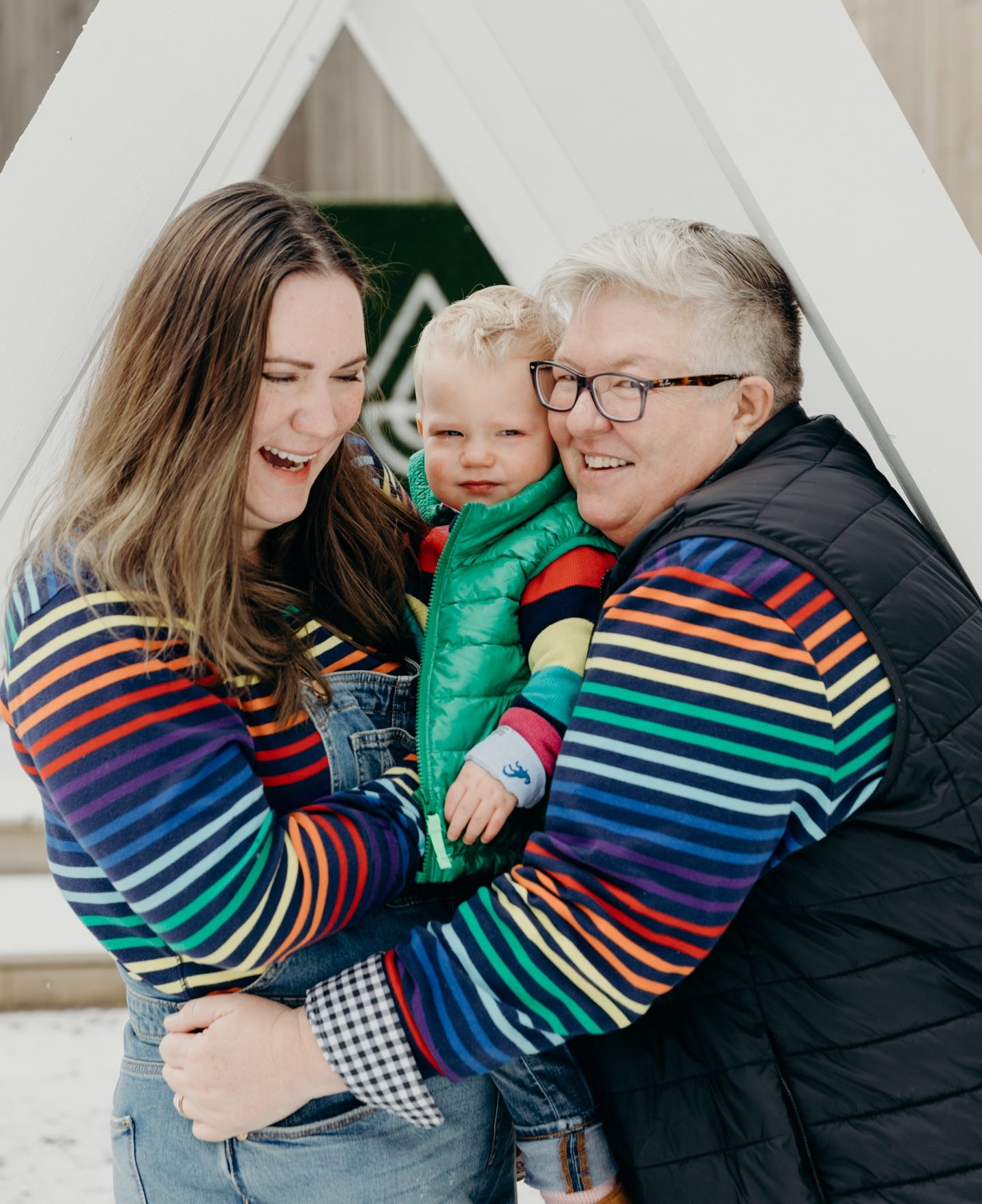 photos by Kennon Bryce at The Copley

We met because of a shared professional passion for supporting kids and families. And our meeting occurred at a time of great change for us both. Kris was recently separated from her ex-wife on the heels of finalizing an adoption of their grade school-aged child. I, too, was leaving a dysfunctional relationship.

In our first meeting, Kris (shorthair domestic lesbian) was promoting a social group for LGBT youth, and I (Rebekah, longhair Oklahomosexual), immediately hoped to get involved as a mentor. But Kris did not return my email until a chance meeting at a local lesbian establishment some weeks later. 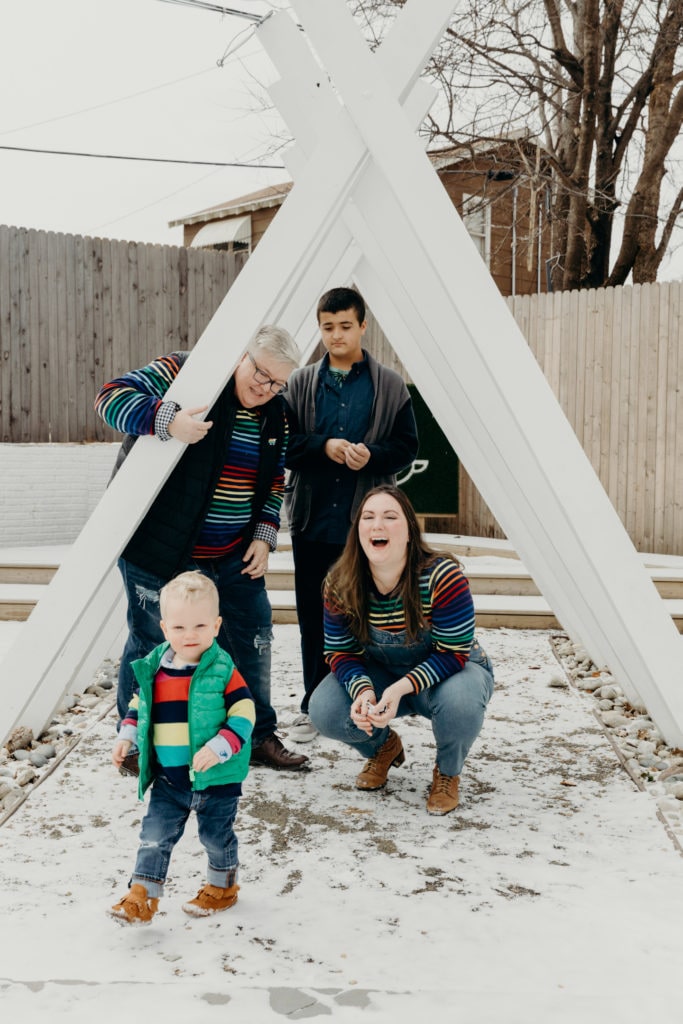 We recognized a love of community and a desire for family in one another that had felt unseen in our previous lives. And with both of us coming from large religious families ourselves that rejected us because of being gay, we were culturally similar. We moved in together and lived happily ever after. (I say this in the most lovingly teasing way because our community is known for moving into relationships quickly. #UhaulLesbians)

Okay, just to review here: two sets of relationship trauma from our families. One child whiplashed from adoption and divorce. Two people forced from their faith traditions.

Were it not for a mutual commitment to healing and effective therapy the story would have ended with the way I danced. And it was through the therapeutic work we did in recognizing the injustices of our own childhoods that we became even more aware of injustices to children here and now.

It was about three years into our relationship that we started talking about having a baby. This conversation also included a “getting married” conversation; not because of any traditional reason, but to establish Kris’ parentage on legal documentation. But there was time for that—and we had to find sperm first.

The use of “known donors” certainly isn’t unheard of in our community. Many of the conversations we found while researching our options focused on cost, convenience and legal concerns. Legally speaking, the most secure way to conceive is to use a sperm bank AND complete a second parent adoption. However, that would mean our child would not have access to their biological heritage, much less a relationship. Having seen Ozzy, Kris’ son, deal with the reality of not knowing his biological family due to the circumstances of his adoption, we decided to use a known donor.

But it wasn’t until a friend described their straightforward and successful experience using a website that serves as a connecting platform for known donors and recipient parents that we took the plunge. And what a plunge it was! After creating a profile we were immediately inundated with offers, which was disconcerting given that WE are the ones asking for a gift of profound significance. Call me old-fashioned, but I’m the kind of lesbian who likes to be the one to “make the first move” with my sperm donor, not the other way around.

We did make the first move eventually, with someone who was as new to the process as we were, and one weekend a lesbian couple met a gay man and Queer magic happened.

Then the two week wait. The positive test. The joy! The shock.

For future reference, developing a new relationship while your hormones are doing amazing 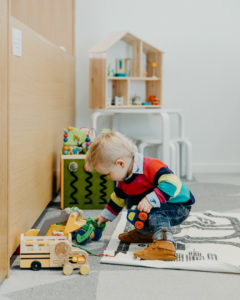 and unpredictable things does not make for an easy flow. We were excited to get to know our donor more and to have him come with us to the doctor, be involved as our friend and our child’s family. But. The. Anxiety!

I know many pregnant people develop anxiety because of the 24/7 access to horror stories that is Google. Now add to that the horror stories of known donors who sought legal custody as soon as the baby was born. Or the known donor who turned out to be a pedophile. Or the known donor with so many progenies that there’s little hope of ever knowing them all. The what-ifs about the future of that relationship, combined with pregnancy fears, and trauma from our familial rejections served as the emotional setting for Warren’s birth, induced a month early because of complications.

The family that we were establishing came with more hurdles than we anticipated. It’s not like our community comes with a guide on “How to Build Your Queer Family That Does Not Conform to Heteronormative Standards Because You Will Never Fit in That Box.” Our donor did things in the beginning of the pregnancy that were very sweet, but also scary to us because of this uncharted territory. Being vulnerable with someone is already hard enough. But being vulnerable with your baby and your family with someone else is terrifying!

The fear and anxiety caused a hiatus with our donor. He respectfully gave us space but was 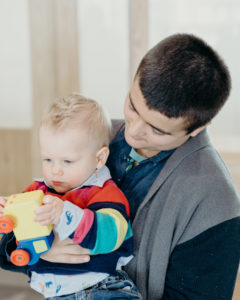 heartbroken—his idealism and sensitivity is so like Kris in that way and one of the reasons we chose him. During that hiatus, I found a group of donor conceived people on social media, which was immensely eye-opening to things we had never considered. Kris was particularly moved by one of the people talking about her wishing that her parents understood that the donor might have been THEIR donor, but he was her DAD. So many of them talked about wishing they had the opportunity to know their biological people growing up, including siblings. As Queer people, we knew what it was like to have our parents do things their way for their own comfort.

It was time to be brave. Time to have hard conversations, tear down walls, communicate boundaries, manage our fear and “Build Our Queer Family With Our Standards Because We Get to Decide What That Looks Like.”

We reconnected with our donor, in hopes that he was still willing to be a part of our lives. He was hurt, but he’s brave, too.

The best dance yet 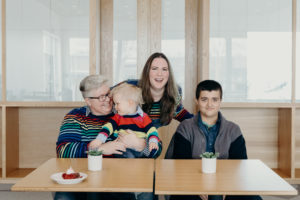 We video call Warren’s dad, Harlan, every Saturday. So far, they share a love of dogs, bananas and female singer-songwriters. Harlan’s mom got to meet her first grandbaby on Thanksgiving 2020 during a family Zoom call, and “Gigi and Papaw” have shown themselves to be experts in Warren’s taste in toys. Ozzy, ever the protective older brother, told us he is glad Warren’s dad and extended family are in our lives because he knows Warren will have questions. Slowly but steadily we’re all finding our rhythm together, moving to the beat, making a space for the best dance yet. It’s already clear that Warren has moves to teach us all! 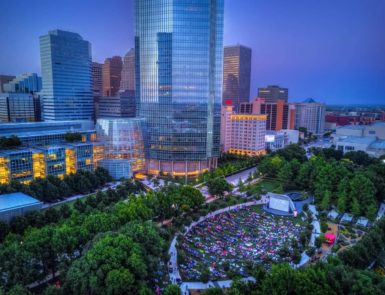 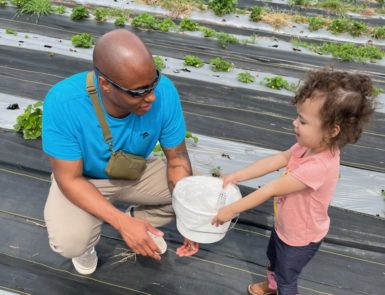