The Story Behind Our November Cover - MetroFamily Magazine 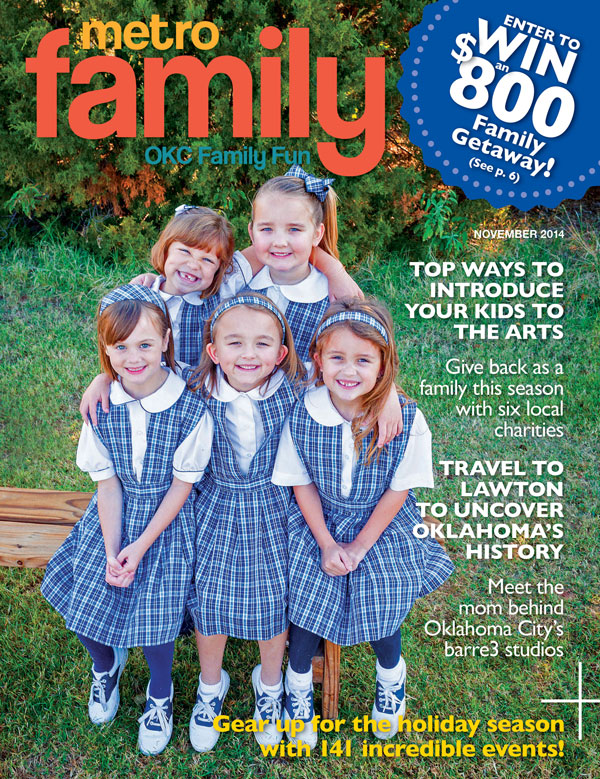 On our cover this month, you see the bright faces of Ava and Olivia Chapman, Kate Folmar, Delaney O’Brien and Andie Wedel, first graders at St. Mary’s Episcopal School in Edmond.

They grace our cover as the winners of our Girls Making a Difference contest, which we conducted with the help of the Girl Scouts of Western Oklahoma to encourage metro girls to give back to the community.

The contest called on local girls to complete a community service project and send in a photo of them at work. Readers voted on several entries to determine first, second and third place winners and the group of St. Mary’s students won first place for their work in gathering pet supplies to donate to Free To Live, a non-profit animal sanctuary in Edmond. The no-kill shelter matches local families with more than 200 adoptable animals each year.  The girls tackled the project through the service learning program at the school. There, students as young as preschool give back through service projects each year.

“The whole concept of service learning is to say, ‘I can’t do everything for everybody, but I can help one person,’” said Administrative Assistant Suzanne Airington, who has worked at St. Mary’s for 23 years.

Airington said it’s been a privilege to watch students get involved in giving back and grow in their involvement in the projects as they get older. Projects range from the animal shelter work done by the girls who won the MetroFamily contest to volunteering at the Special Olympics in Stillwater, collecting coats to donate in winter weather and gathering food to donate to the Regional Food Bank of Oklahoma.

“It does instill some gratefulness,” Airington said, “and just the attitude of being thankful for what we have. It’s a chance to talk to the kids about what it’s like to go without so many things they have and really be appreciative.”

The second place winners were Kathryn Pitman and Jessica Milner, middle schoolers who completed a similar project. They collected blankets, toys and food for pets at the City of Norman Animal Shelter. Both are animal lovers with pets of their own. They said it felt good to show some love to animals without homes. Milner said the project wasn’t as difficult as she thought it would be, and she was surprised at how willing people were to donate when they were asked.

The third place winners in our contest were nine girls in Girl Scout Troop 3222. Madison Hooker, Chloe Buckner, Issabel Agbogbo, Tessa Fasching, Emily Bakhtiari, Katelyn Huskey, Fiona Langthorn, Annabella West and Ainsley Clifton worked to reclaim the Teaching Trail at Lake Arcadia by trimming trees and bushes and repainting the signs at the trailhead in hopes that more people would be able to use the trail in the spring. Fiona Langthorn is a seventh grader in the group.

“It feels amazing to be giving back to the community and the area that I grew up in,” Langthorn said. “We believe that if more people used the trail it would give them incentive to keep up with the trail and keep it in the beautiful state it’s in.”