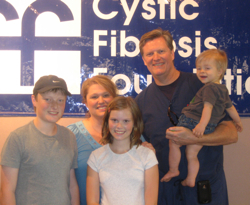 Siblings Lauren and Will Harvey are just like any other kids—they attend school, have a group of friends and enjoy hobbies. But when it comes to many common things, such as eating three meals a day and even breathing, the Harveys are quite different.

Lauren and Will were diagnosed with cystic fibrosis (CF) as infants. CF is a chronic disease that affects the lungs and digestive system. Approximately 30,000 people in the United States are impacted by CF. A defective gene and its protein cause the body to create unusually thick, sticky mucus that clogs the lungs and makes it difficult to breathe. Mucus-producing cells also line the stomach and pancreas, clogging passageways and making food digestion difficult.

In the past, physical activity was considered dangerous for people with CF. Current research, however, has found that cardiovascular activities are beneficial to the overall health of CF patients. The movements involved in tennis, for example, act as a natural chest physiotherapy and help break up mucus in the lungs to allow easier breathing. It also stimulates coughing to clear airways and improves health by lowering blood pressure and strengthening the heart.

In addition to daily medications and breathing treatments, the Harvey children find relief from their symptoms by playing tennis several times each week at The Greens Country Club. The Harveys say the sport provides physical benefits for 11-year-old Lauren and 15-year-old Will, as well as the emotional and mental well-being that comes from feeling like normal children.

Dr. Mark Harvey said it feels great to be able to see his children participate in activities like tennis when, historically, kids with CF didn’t live long enough to even attend school. Another promising development is that Lauren and Will currently both have normal lung function, which Dr. Harvey credits to the breathing treatments and medications that allow the children to stay physically active.

In conjunction with the Harvey family, The Greens hosts an annual tennis tournament to benefit the Cystic Fibrosis Foundation each April. The Greens’ CF tournaments have raised more than $35,000 over the past four years, and participation has more than doubled since the first event.

While no cure has been found yet for CF, medical advances have extended and enhanced the lives of CF patients. “For us, the great part is that we can do something to try to prevent the progression of cystic fibrosis,” Dr. Harvey said. “Every day we delay it, it gets us one day closer to the hope on an effective treatment or cure.”