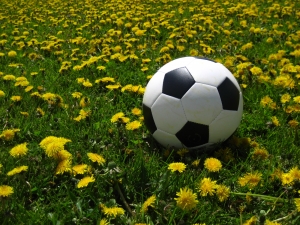 Spring is fast approaching, and many parents and students are starting to think about preparing for spring sports. With childhood and adult obesity rates continuously on the rise in most states, sports participation can be a wonderful way to stay in shape while engaging in a fun social activity that teaches the importance of teamwork. On the other hand, with increasing media attention about the potential dangers of sports injuries, it’s important for student athletes to carefully condition their bodies to minimize the risk of injury.

Concussions, in particular, have been a point of concern for many parents, with President Obama even recently commenting that if he had a son, he would “have to think long and hard before (he would) let him play football” because of the potential risk of injury. However, it is possible to at least reduce the risk of serious injury with proper preparation and training.

With many school districts and sports programs requiring a sports physical prior to starting a new sport or beginning a new season, many student athletes simply think of sports physicals as routine, sometimes even a hassle. What some may not realize is that the Participation Preparation Exams (PPEs) are actually a crucial conditioning step. In fact, if your school district or sports program doesn’t require a PPE, it’s highly recommended by medical experts that you schedule one anyway.

There are two main parts to a sports physical exam which helps to determine if it is safe for a patient to participate in a particular sport. The medical history portion consists of questions about the athlete’s health history as well as any family history of illness or risk factors that might prohibit participation in a sports program. Patients are asked about their history of childhood illness, such as diabetes, epilepsy or asthma; previous surgeries and/or hospitalizations; past injuries, and any medications or supplements the patient may be taking.

Many sports medicine doctors consider health history to be the most important part of the physical, so it’s important for patients to take their time and answer the questions carefully. During the physical exam portion, the doctor will typically record the patient’s height and weight, take a blood pressure and a pulse, check the heart, lungs, abdomen, ears, nose, and throat and evaluate the patient’s posture, joints, strength and flexibility.

Katie Sanderson is a recent graduate of the University of Central Oklahoma’s Kinesiology program, which is the study of human body movement. She interned in the Edmond public school system coaching high school students in strength and conditioning for various sports. She also attended college on a full basketball scholarship, so she is well aware of the risks students face. “It’s rare that a physician will prohibit a student outright from participating in a sport. Even in cases where there is some concern, such as with an asthma patient, the benefits of exercise typically outweigh the risks for most people, so they usually will let them attempt it. In cases like that, it’s important to keep everyone informed and listen to your body. If necessary, modifications can be made to accommodate medical conditions.”

When it comes to preventing injuries, Sanderson stresses that proper and thorough conditioning is key. “While sports participation has many positive benefits for people of all ages, it’s not unusual for students to overlook the importance of strength training. Students often find themselves pressed for time, and if they’re going to cut corners, they tend to do so on conditioning.”

Most coaches have some conditioning exercises built into practices. “What we find [to be] most effective is an active warm-up, such as jogging or walking, followed by stretching after the workout or practice. I always stress to student athletes that it’s better to stretch after a workout than before. Spending time cooling down and stretching will prevent muscle soreness and improve flexibility. With that increased flexibility, your muscles have more room to give when they’re under strain, so they’re less likely to tear.” In the event of an injury, those who are properly conditioned will recover much more quickly.

If an injury should occur, it’s important to listen to your physician and take time to recover. “The level of competition for student athletes is growing steadily, and it’s not uncommon for them to want to rush back out on the field or the court. Your doctor will clear you for various activities as you heal, and it’s important to follow those guidelines and not get in a rush,” notes Sanderson. Usually, a series of physicals is required before student athletes will be cleared for full participation.

The long-term effect of repeated concussions has recently been receiving a great deal of media attention. Former NFL player Junior Seau committed suicide in May 2012, and his autopsy revealed that he was suffering from chronic traumatic encephalopathy (CTE), a type of degenerative brain damage that has been found in other deceased NFL players. The result of repeated head injuries—usually from contact sports—CTE is characterized by symptoms of dementia such as memory loss, aggression, confusion and depression. Symptoms may appear within a few months of the trauma, or the onset may be delayed for several years.

When it comes to concussions, Sanderson stresses that athletes need to take them seriously. “For a long time, an athlete ‘getting his bell rung’ meant sitting out until they felt like they could play again. Concussions are much more complicated than that. Just because you feel okay doesn’t mean that you are. We’re figuring out that there are long-term effects to repeated blows to the head way too late, but I’m thankful that all of the recent publicity is leading to a greater awareness and improved safety in contact sports,” she says.

“Athletes who sustain concussions MUST NOT be allowed to participate in a sport until they are cleared through a series of physicals which test motor skills and mental acuity in addition to physical fitness,” she says. That said, she says she doesn’t feel she would want to prevent her future children from participating in contact sports.

“I’m all for student athletics. There are so many wonderful benefits. But they have to be done the right way, with careful attention paid to conditioning and safety.”

Shannon Fields is a freelance writer and single mom to two girls. An Edmond resident, she graduated from the University of Central Oklahoma and is an HR manager in the medical field