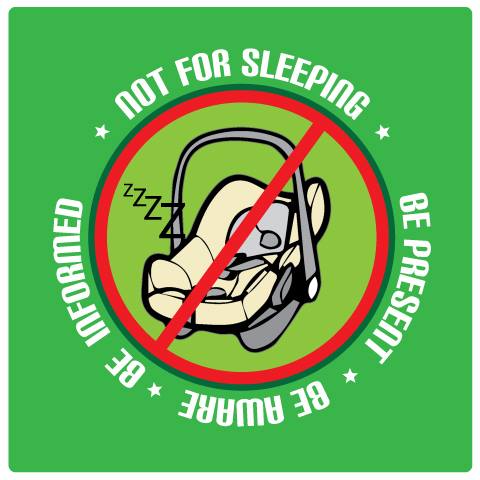 October is SIDS, Pregnancy and Infant Loss Awareness Month. To many families, that might not mean much. To Ali Dodd, it's an opportunity for her to get a few more people thinking about unsafe sleep. In April, Ali's son died a preventable death at a local in-home day care. He was unbuckled in his car seat and his sleeping position caused his airway to be blocked and he suffocated.

Her son, Shepard, was just 11 weeks old when he died. Ali is determined to use what she's learned from this tragedy to raise awareness about Sudden Infant Death Syndrome, or SIDS, and unsafe sleep surfaces. She's raising awareness through a campaign called Shepard's Watch.

"Through Shepard's Watch, we're just trying to provide education for everyone who wants it," she said. "Day care providers, parents, grandparents, anyone with a responsibility to look after an infant should know about this."

Years ago, the Back to Sleep campaign educated parents about the importance of having kids sleep on their backs to prevent SIDS. The wildly successful public health campaign led to safer sleep environments for countless kids and a significant dip in the number of infant deaths.

"What we're seeing now is that infants are dying in car seats and swings," Ali said. "I think it's because we think of these things as safe devices."

The American Academy of Pediatrics has long advocated babies sleep alone, on their backs and in a crib. Ali realizes parents (especially new moms) are grateful when babies sleep anywhere. However, safe sleep practices could have saved her son's life.

Around the same time of Shepard's death, the Journal of Pediatrics released a study in which researchers examined 47 cases of children under 2 years old who died while in devices designed for sitting or carrying. Two-thirds of the cases involved car seats while the remaining deaths occurred in slings, swings, bouncers and strollers.

After Shepard died, Ali wanted to get the word out about safe sleep practices in hopes other parents would not lose their own children. She contacted the Oklahoma City-County Health Department to try to get some literature to distribute but they didn't have any specifically about avoiding carriers for sleeping.

Supervision and safe sleep surfaces are the two biggest things Ali promotes through Shepard's Watch. She urges parents not to let infants sleep in carrying or sitting devices. If infants must sleep in car seats, they should be secured properly, just as tight as they would be traveling in a car.

She hopes her story encourages other people to be more aware of how they let their children sleep and not be afraid to speak up if they see an infant in danger.

"Not to overstate this or make it seem dramatic," Ali said, "but if there's a child playing in the street, you would go get them and walk them to safety. Action is important. If you see an unsafe sleep situation, it's okay to say, 'hey, you may not know this but I have a friend whose baby died sleeping like that.'"

Ali is educating the public about preventable infant death through her Shepard's Watch Facebook page. She's also in the process of raising money to get brochures printed to give to local doctors to help spread the word to their patients.

Ali is not alone. An average of 400 babies die before their first birthday each year in Oklahoma according to the Oklahoma City-County Health Department's Fetal/Infant Mortality Review. Find tips for safe sleep and SIDS prevention here.