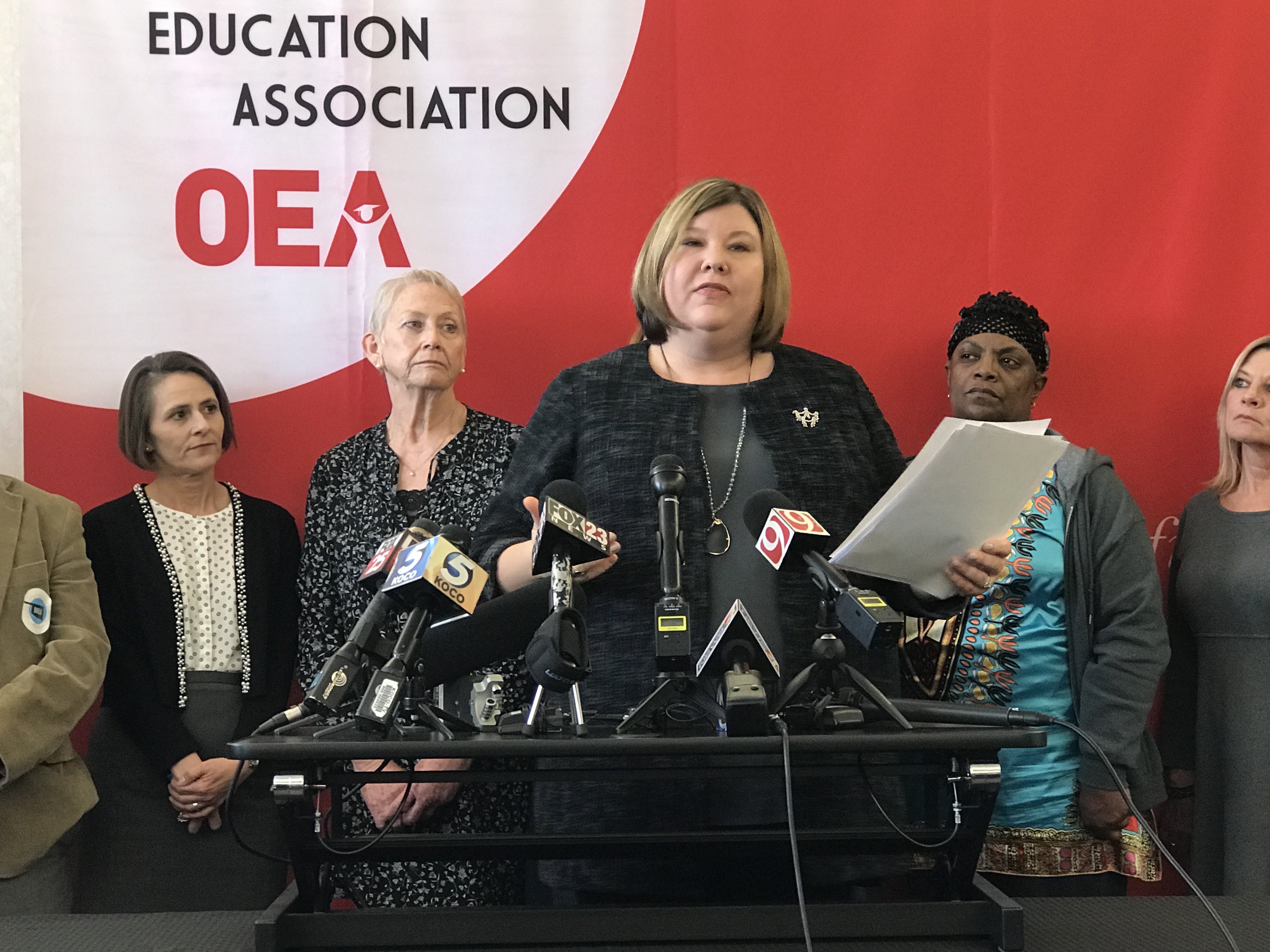 Update as of 3/16/18: We now know that the legislature has attempted and continues to attempt to pass bills to give teachers a raise but so far, the bills haven’t passed and the teacher’s union is calling them a “no go” because they don’t give a big enough raise to teachers and ignores support staff and other state workers.

March 9, 2018: If the Oklahoma State Legislature does not meet a list of demands from the Oklahoma Education Association to fund increases to Oklahoma’s teacher and support staff pay as well as a restoration of funding to public schools, then a statewide school closure will ensue on April 2.

In a press conference Thursday, the OEA and other organizations presented a list of demands to the legislature which include state employee raises and improved health care funding in a three-year plan that also includes $812 million for FY 2019.

“Today we're putting lawmakers on notice. If they do not meet the terms we’ve laid out, then on April 2, the Oklahoma Education Association calls on every teacher, support professional and administrator to walk out of their school house and headed to the State House,” said Alicia Priest, OEA president. “On April 2, schools across the state will begin to shut down. We know this movement is already making an impact because today we're hearing that the legislators are working on a $2,000 pay raise for teachers well after 10 years without a state-funded pay raise. After waiting so long for additional compensation that we've fallen to 50th in the country for teacher pay, we say to the legislature, ‘that's too little too late today.’”

OEA’s proposal calls for funding increases during the next three years, which include:

The press conference included representatives from public schools, the faith community, The Oklahoma Energy Producers Alliance and more. State Superintendent Joy Hofmeister also called on legislators to increase education funding Thursday, saying that Oklahoma teachers will walk out after numerous plans to provide the first teacher pay raise since 2008 has failed in the Legislature.

Although the OEA plan does not include specific revenue-raising sources, Priest said suggestions in all the former plans that have failed remain.

“We know there are a myriad of plans out there that can guide the Legislature on how to get there. We also know of specific revenue sources that are more popular than others and would impact working families the least,” said Priest. “There's already been lively discussion about restoring the (gross production tax) to seven percent and there's a ballot measure that will do that if the legislature fails to act. We know we need to reform our income tax structure. There's a bill going through Senate right now that eliminates the capital gains exemption. We need to increase the cigarette tax. These are examples of the endless possibilities of where the legislature could find funding.”

What was clear was the deadline the OEA presented to lawmakers.

“The legislature has about three weeks to act and fund public education before the April 1 deadline. They have worked swiftly before – we've seen it,” Priest said. “They can accomplish big things if they work together. Those are the things we teach in kindergarten. The time is now for that to happen.”

Although the plan is to continue school closures until the funding is in place, Priest said discussions are being held in communities throughout the state on how to continue student feeding programs and tutoring programs for students getting ready for ACT or Advanced Placement exams.

“The legislature puts out a lot of bills that tell us in public schools what to do and how to do it in our classrooms and we are the experts,” Priest said. “So we're going to allow the legislature the deference to create the revenue package that will be required to pay for the needs of our students in schools that we are demanding today.”

The school closure plans may also include a walk out of state employees, though no plans are currently in place for that, said Sterling Zearley, executive director of the Oklahoma Public Employees Association.

He added that the OPEA would meet Saturday with legal counsel to assess what options were available to state employees.

Etta Taylor, state president of the Parent Teacher Association, said the school teachers and districts have the support of parents in the planned walkout if the legislature fails to meet funding demands.

“We see too many great teachers say goodbye to Oklahoma and drive across our borders to other states and make $5,000, $10,000, $20,000 more. We see too many teachers leave the profession because they don't make enough money to take care of their families,” she said. “These are the reasons that Oklahoma parents will be standing with our teachers and professionals. We don’t want to close schools. Get the legislators to do their job. There have been way too many empty promises. We cannot wait.”

In 1990, Oklahoma teachers held a four-day walkout that resulted in increased pay and funding for education. The possible school closure has been supported by school districts and parents across the state, including Oklahoma City Public Schools and Tulsa Public Schools.

“On behalf of the Executive Board of the Oklahoma City Building Administrators (OCBA), we support our Teacher colleagues in their effort to advance a budget, or promote legislation, that would increase funding for schools and increase salaries for certified school personnel,” the statement read.

In a survey of building principals, 76 percent of respondents supported a job action, in the form of canceling classes if necessary, in order to elicit a change from Oklahoma Legislature.

“Legislators have not only created a teacher shortage crisis in the state of Oklahoma but have also devalued the education profession to the point where educators and their supporters across the state now see no recourse but to bring us to the brink of school closures statewide,” the statement read. “This is an action of last resort.”

While the OEA said that schools would remain closed until demands are met, districts would still need to meet school hour and required testing requirements or lose federal funding.

The Oklahoma school walkout comes on the heels of a nine-day teachers' strike in West Virginia ended Tuesday when the West Virginia governor signed a bill for a five percent pay raise.

“If they put in growth revenue, they absolutely can do it. They just have to have the will and the fortitude to make it happen,” she said. “We're going to give them the will to do that. We are all voters and we are watching what's going on.”

We've put together a list of resources for parents if there is a teacher walkout.