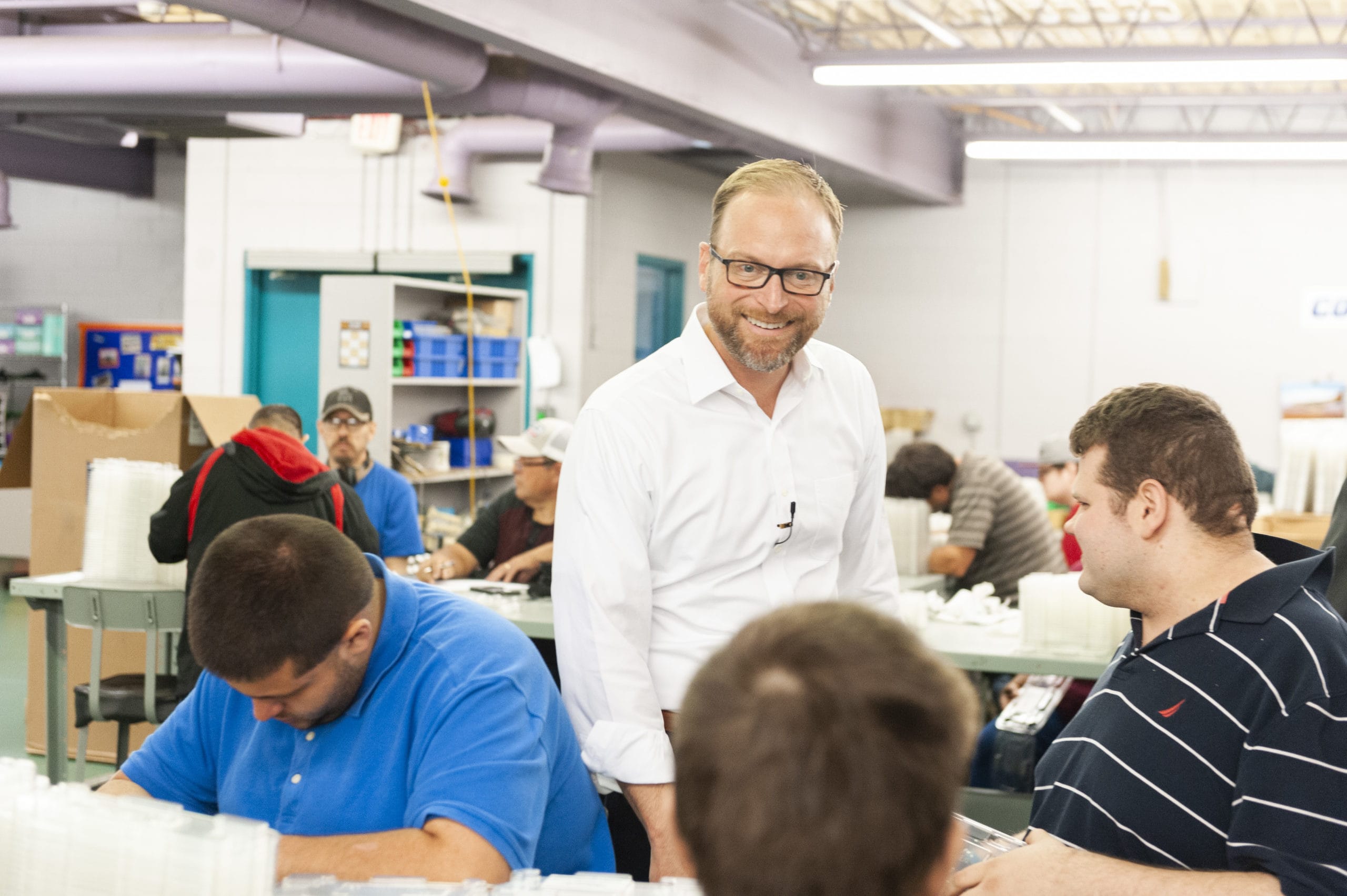 One year ago, Justin Brown’s perception of the Oklahoma Department of Human Services was created exclusively by stories from the local news. Now he runs the state’s largest agency and is quick to concede his first impressions couldn’t have been further from the truth.

At age 40, Brown was appointed director of OKDHS in June 2019 by Gov. Kevin Stitt. Formerly the CEO of Choice Capital Partners, Brown built a passion for serving seniors with Alzheimer’s disease and other forms of dementia through his role in managing the business behind assisted living centers across three states. Though no stranger to the responsibilities and dedication required in caring for a vulnerable population, Brown acknowledges a learning curve as he’s acclimated to a career in state government. On the flip side, the businessman’s fresh perspective, visionary thinking and heart for service have been catalysts for continued improvements in the agency. As such, Gov. Stitt also appointed Brown cabinet secretary of human services and early childhood development in March.

As May marks National Foster Care Month, Brown reflects on his first year as OKDHS director and his vision for the future.

What has been most eye-opening during your first year as director?

Coming from the private sector, my initial view as an outsider of what a government state employee is could not have been more wrong. Within the first day, it was clear that we have an unbelievable workforce. These people are so passionate about what they do and they are highly qualified, from the state office level to the employees at the county level across the state. They’re all in.

As the agency has been built up over the years, barriers have gotten in the way. We have created well-intentioned programs but not always thought about how they work together. Combined with underinvestment in technology, I could see within the first few weeks that our system is not set up to facilitate really great working relationships and support for one another. The fact that we have such great people who are so dedicated is a testament to how passionate they are, even with a broken system.

What is your impression of DHS employees now, specifically those who work within Child Protective Services? 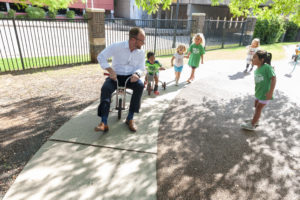 I went on a Child Protective Services ride-along a few months ago to a home with a claim of neglect. The CPS employee walked right up to the door and knocked, having no clue what was on the other side of the door. She does this every day; she’s so courageous. I was a glorified babysitter for three hours, playing with the kids and dogs, while she did the interviews, and it was eye-opening to me what heroes these people are. The same goes for a call I went on with a permanency planning worker. They are always walking in with an advocate heart for those they are trying to help.

What are the biggest successes you’ve noted in the last year?

We have so much to do that as I move forward I haven’t been great at looking back often enough to celebrate successes. The biggest success has been all about teamwork; we are creating a culture of relationships and collaboration. This intentional culture of working more closely together within our own agency is starting to take hold with inter-disciplinary teams. If we have a child welfare issue, the real concern might be poverty, so we create these teams to all work together.

We want to work well with our partners in the community, whether that’s foster care agencies, the legislature, tribes or nonprofits all over the state. This culture is being perpetuated, and we have to have help to do this the right way, to create real, genuine working relationships.

How has being a dad impacted you in this role?

Having kids and being a dad is my joy. One of my favorite things is making breakfast for my kids every morning. Hannah is 12 and Ford is 10, and being their dad puts a mission behind this role that’s even deeper than my desire to support my state and serve others. To help build a state that provides the same opportunities my kids have for all kids, that personalizes the mission for me because I think about them in the same situations that we see.

How has being director of DHS impacted you as a dad?

My family and I had a lot of conversations leading up to my accepting this role, knowing it would be an emotional position for me. I’ve been able to share with my kids what’s happening in the world around them more directly. We are involved in various nonprofits and take our kids to volunteer at the food bank once a month to pack back packs for kids, but it’s wholly different when you are in a job where you carry a personal weight. There’s a burden and I go home and include my family in that conversation. Many of us have sheltered lives, and I hope removing some of that shelter is positive for my own kids.

What does the general community not know about OKDHS?

It’s like an iceberg. What you see is so small compared to the whole truth. We are doing everything we can as an agency to start to change our narrative. Candidly, nine months ago my impression of the agency was purely driven based on what I saw on the evening news. Just like my impression of state employees was wrong, my impression of the [agency] was wrong. There are a thousand incredible stories happening inside our agency every day. Lives are being changed for the better. These stories aren’t often told and definitely don’t get social media likes, but our people are simply doing the right things. They deserve more recognition. We have not been great at telling those stories and that is not acceptable; we’re going to do better.

What’s your vision for the future of OKDHS?

We are literally changing the world out of OKDHS. We’re going to be a catalyst for world change, not just state change, doing things that have never been done. We investigated just over 81,000 cases of abuse and neglect last year, with 90 percent related to neglect and 70 percent related to poverty. If we can think about poverty in a different way, work with the programs we operate within our agency, then we can address poverty in a massive and material way. Those world-changing initiatives are going to be helping families lift themselves out of poverty so we have eight cases to investigate instead of 81,000.

As we recognize National Foster Care Month, what can metro families to do help?

We need partnerships, not just with organizations but with individuals on the ground level. If you aren’t ready to be a foster family, help out a foster family. Sign up to provide respite care so they can have a night out or bring them a meal. The reason we have so much need [for foster families] is because it’s hard, it’s complicated and it requires a different way of thinking. The agency is working to become more supportive of our foster families, who need tools and resources, transitioning to an agency that is really serving those who are serving our kids. 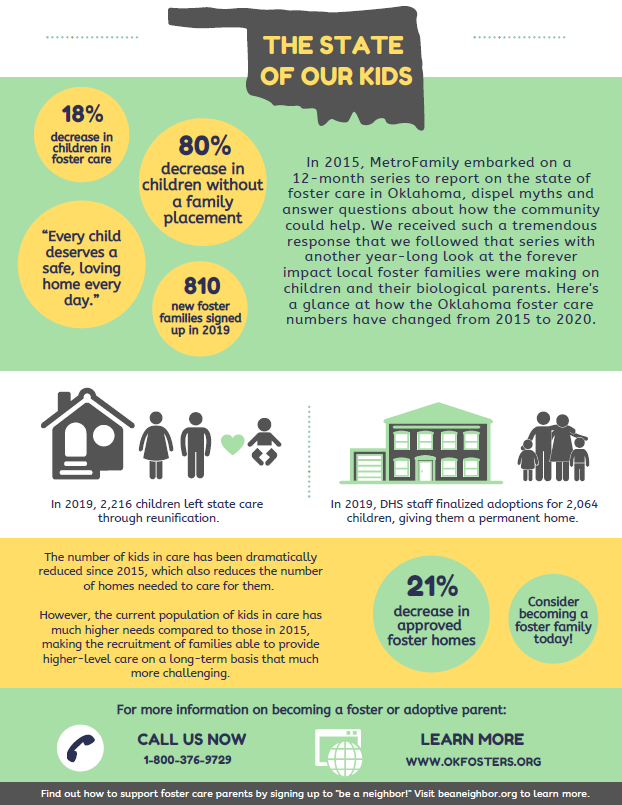 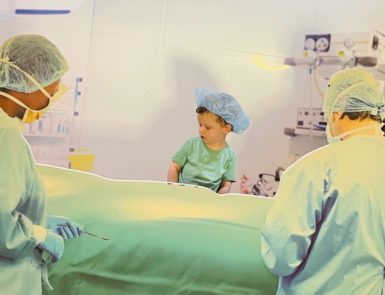