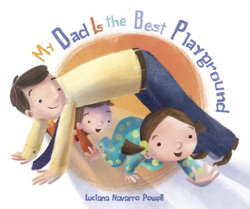 Summer reading for everyone! Check out these titles for children of all ages from Random House books.

My Dad is the Best Playground
By Luciana Navarro Powell
Robin Corey Books, board book, $8
A reminder that the best thing a parent can offer to their child is their time. Book features a day in the life with two young kids and the world’s most interactive, hands-on dad.

Small Bunny’s Blue Blanket
By Tatnana Feeney
Alfred A. Knopf, hardcover, $17
What happens when Small Bunny’s mom insists on washing his favorite blue blanket so it’s ‘as good as new’? Well, he’ll just have to wear off the new. A heartwarming tale that small children with favorite blankets will love.

Baby Listens
By Esther Wilkin
Golden Books, hardcover, $4
A classically-illustrated Golden Book (originally copyrighted in 1960) that explores through the many sounds that baby encounters in his day. Onomatopoeia makes this especially fun to read aloud.

Hide & Seek
By Il Sung Na
Alfred A. Knopf, hardcover, $16
This story is a whimsically illustrated adventure in the jungle. Elephant counts and the animals hide. In the end all are found, except chameleon—and when he makes his appearance it will make you want to read the book again to find him hiding on each page!

Ollie & Moon: Fugheddaboudit!
By Diane Kredensor, photographs by Mike Meskin
Random House, hardcover, $16
Two crazy cat friends make a trip around New York City as one friend (Moon) tries to get the other friend (Ollie) to laugh. Moon does her best to get her friend to giggling but it isn’t until something unexpected happens that they both crack up. A fun way to see New York City landmarks and enjoy a story of friendship

Elephant Joe, Brave Knight!
By David Wojtowycz
Random House, hardcover, $17
In the kingdom where Elephant Joe and Zebra Pete live, does anyone really expect things to be as expected? Of course not. An irreverent, fun story where things aren’t always what they seem but good manners are always the right response.

Mario Makes a Move
By Jill McElmurry
Schwartz & Wade Books, hardcover, $17
Mario is a squirrel who delights his family with his amazing moves … until he realizes that he’s not the only creature who can be amazing. But when he learns to work together with his new friends Isabelle, there are no ends to the fun they can create.

A Song for My Sister
By Lesley Simpson, illustrated by Tatjana Mai-Wyss
Random House, hardcover, $17
Be careful what you wish for—when Mira wishes for a sister and her wish comes true, it doesn’t turn out the way she had hoped. But in the end, it turns out even better. A story about families that also incorporates a traditional Jewish ceremony for welcoming baby girls to the family and community.

Step Into Reading—Step 3: Pretty Penny Comes Up Short
By Devon Kinch,
Random House, softcover, $4
Pretty Penny gets creative when it’s time to raise funds to donate to a worthy cause, and she involves the whole neighborhood. But when one of her friends decides he is more worthy of part of their donation, he learns a lesson. A stinky lesson.

I, Galileo
By Bonnie Christensen
Alfred A. Knopf, hardcover, $18
Einstein called Galileo “the father of modern science” for good reason. He invented the telescope, compass and microscope and insisted that the Earth and other planets revolved around the sun—ideas that would lead to his imprisonment. This colorful narration reminds young readers that sometimes you have to pursue the truth, no matter the personal cost.