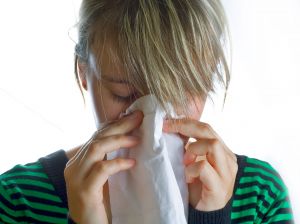 With springtime approaching, most of us look forward to blooming flowers and budding trees. Unfortunately, many are also dreading the upcoming allergy season. As many as 25% of Americans suffer with seasonal allergies, but these symptoms can be treated and perhaps even prevented with a little knowledge and care.

Allergies are caused by an overreaction of the immune system when it is exposed to a normally harmless substance, known as an allergen. When an allergic reaction occurs, the body produces an antibody called IgE to fight the allergen. These antibodies attach to mast cells, which are plentiful in the airways and the gastrointestinal tract where allergens tend to enter the body. The mast cells then explode and release excess histamine, causing inflammatory symptoms such as watery eyes, itching, and runny nose.

When the body is exposed to an airborne allergen, the reaction will most often occur in the eyes, nose, or lungs. Allergens which are ingested often cause symptoms in the mouth and digestive tract. In some cases, enough chemicals are released from the mast cells to cause a reaction throughout the body, such as hives

How Are Allergies Treated?

Antihistamines work by blocking the histamine released by the mast cells and are often recommended to treat symptoms such as runny nose and watery eyes. Antihistamines are available in several forms, and some may cause drowsiness.

Stephanie Harris, a pharmacist at Hospital Discount Pharmacy in Edmond, spends much of her time during the spring counseling patients on the proper use of allergy medications. “We now have a few non-drowsy antihistamines, such as Claritin, available over-the-counter. I usually ask people exactly what type of allergy symptoms they have and tell them their options based on that.”

To treat nasal congestion, a decongestant alone or in combination with an antihistamine may be recommended. “Patients with high blood pressure should contact their physician before using a decongestant,” Harris cautioned. For chest congestion, an expectorant such as guaifenesin may be helpful. Expectorants work by promoting drainage of mucous from the lungs, either by irritating the bronchioles to cause expulsion or by thinning the mucous and lubricating the respiratory tract.

Sometimes the solution is simpler and may not require medication. “We’ve been getting great feedback on some of the saline nasal rinses like Entsol,” Harris said. Such products work by reducing nasal swelling and flushing the allergens from sinus passages. Harris also recommends increasing fluid intake to keep mucous membranes moist, which may prevent airborne allergens from attaching to mucosal tissue.

Dave Mason, also a pharmacist and owner of Innovative Pharmacy Solutions in Edmond, agrees. “Hydrating the mucous membranes is the first step in preventing allergies.” He also recommends patients prone to allergies consider supplementing with quercitin, extra Vitamin C, and bromelain, which act as natural antihistamines in the body.

“One area where we’re seeing a great deal of promise is with the use of probiotics,” Mason said. A probiotic is a microbe, or “good bacteria,” that protects its host and prevents disease. Recent studies have shown regular use of probiotics may help to reduce the effects of allergies and eczema by reducing inflammation in the body and boosting the immune system. According to Mason, “Probiotic therapy is becoming more mainstream in treating allergies, asthma, and eczema.”

Rest assured, if you suffer from seasonal allergies, relief is available! The solution may be simpler than you think, and there are more choices on the market to ease your symptoms than ever before. Talk to your doctor or pharmacist about the best treatment options for you.

Shannon Fields is a freelance writer and a Certified Pharmacy Technician at Innovative Pharmacy Solutions. She holds a BA in Psychology with a minor in English from the University of Central Oklahoma. Shannon lives in Edmond, Oklahoma with her husband and two daughters.