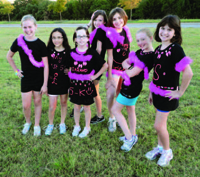 After what has proven to be the longest and hottest summer in our state’s history, autumn brings a long-overdue respite from searing temperatures, allowing us to at last leave the air-conditioned confines of our homes and offices. In my family’s case, this has been the laziest summer of our lives, and as a result, we had all been feeling sluglish and out of shape. We needed motivation and energy to go back to school and to resume our sometimes-hectic schedules. I noticed several Facebook and Twitter posts discussing the Couch to 5K program and began to investigate further. The program was obviously popular, but could it really take someone with no experience as a runner and get her into shape?

Couch to 5K is designed to get ordinary folks (as in non-runners) up and moving and able to complete a 5K run in about nine weeks. The program incorporates three workouts per week, lasting approximately 30 minutes each. Those workouts consist of both walking and running at varying intervals, gradually working up to a more continuous running pace. The benefits of running for fitness are undeniable. Not only can you take off pounds and inches, but these types of workouts improve cardiovascular health and increase energy and metabolism.

Shana Barton is a human resources executive and new mom in her early thirties. After giving birth to her first child in May, she was ready to get back into shape. “One of my co-workers was doing Couch to 5K and recommended it,” says Barton. “I wanted to be healthy, have more endurance, and feel better physically.” Now in her fifth week, she has graduated to running around two miles. She plans to continue running after she finishes the training course, and is considering running in a local race. “It definitely helps me with being in a routine and gives me more energy as a new mom. I actually have more energy now than I did before I got pregnant!”

The mother of two Edmond middle schoolers, Louise Linihan began running not long after the birth of her first child 13 years ago. “Being a stay-at-home mom can be a bit redundant, and I needed to do something that would help me be strong for myself and my family,” she says. “Running is easy, and thanks to the treadmill, it can be done at almost any time in any weather. You just put on some running shoes and go!”

A decade and a half later, Linihan has run in countless races, both in Oklahoma and across the United States. While she calls the Oklahoma Memorial Marathon the most inspiring, her favorite is the White Rock Marathon in Dallas. “Running helps with my health, stamina, and confidence, and there’s this giant unspoken club of runners. There are no dues or meetings or initiation ceremony, and this community is very supportive of all of its members. They’re pretty much excited about everyone that runs, they’re glad to see us trying, and they’re always cheering us on to do better. There are few things better than crossing the finish line after a marathon. I still cry every time,” sas Linihan.

Running For a Cause

This fall, Linihan has taken on an ambitious project. She is working to train the 11- and 12-year-old members of Girl Scout Troop 728 for October’s Race for the Cure. “Last spring, the day before a 5K, my daughter asked if she could run it, and I said ‘No way!’ After she saw the event, she realized she would need time to train, and asked if we could prepare to run a 5K in the fall.” She had the idea to train with her Girl Scout troop, and Linihan offered to help. “Her troop has always been a close group and loves working together on projects. Middle school can be a tough transition, and I thought completing a 5K would be a big confidence boost for her and her friends.” After discussing the matter with the troop leaders and moms, she chose Couch to 5K to train the girls.

“The hardest part about starting a running program is overextending yourself early and burning out before you really give yourself a chance,” says Linihan. “Couch to 5K is a great plan to lead even inexperienced runners to a successful race.”

One of the unexpected perks for Linihan? Not only have the girls taken well to training, most of their moms have joined in as well. (Including me!) Because you see, I’m one of 728’s troop leaders and I’m also a thirtysomething mom in average shape, who needed to do SOMETHING after the most lethargic summer in her personal history. As I’m writing this, I’m halfway through the Couch to 5K program and doing well, even with zero running experience. My seven troop members are also doing remarkably well, and I am confident that we will successfully complete Race for the Cure. Please keep your fingers crossed for us on October 15th!

If you have been looking for a good way to be more active this fall, consider the Couch to 5K program. The gradual, flexible pace allows almost anyone to find success and enjoy the benefits of better health, even with little or no experience as a runner.

Check metrofamilymagazine.com/calendar for other races in the coming months.

New runner Shannon Fields is a freelance writer from Edmond and a Certified Pharmacy Technician at Innovative Pharmacy Solutions.