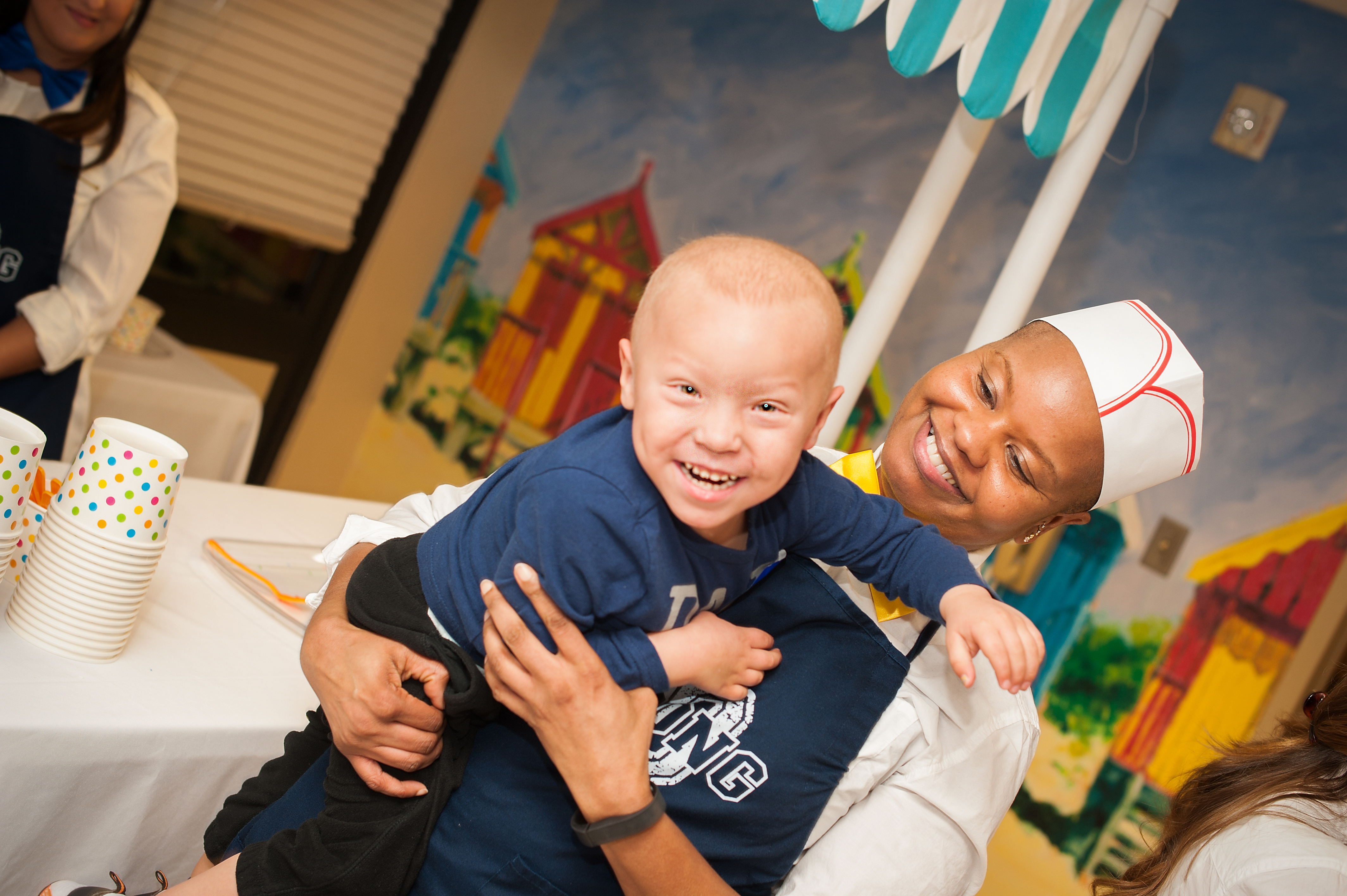 It’s Wednesday night at the Children’s Hospital at OU Medical Center in Oklahoma City. If you’re a mom of one of the patients on the floor, you might not even realize what day it is if not for the women walking around in paper hats taking ice cream sundae orders.

“I’ve been here before when the days turn into weeks and then the weeks turn into months,” said Beth McDowell, the leader of the group serving the ice cream.

McDowell started the group, called 10 Strong because of their continued presence on the 10th floor of the hospital, to serve families whose children are undergoing cancer treatment. The 10th floor is reserved for patients who cannot leave the hospital because they’re undergoing cancer treatment and mixing with the general public could compromise their immune systems.

“We’ve made Wednesday the best day to fight cancer,” McDowell said between scooping ice cream for patients and their families.

McDowell became aware of the need for a morale boost on this floor of the hospital when her daughter, Mia, was diagnosed with neuroblastoma in 2011. She was just 16 months old. Now a healthy kindergartener, McDowell’s daughter spent 120 days in treatment for her cancer. McDowell had just given birth to Mia’s younger sibling as she finished her first round of treatment. 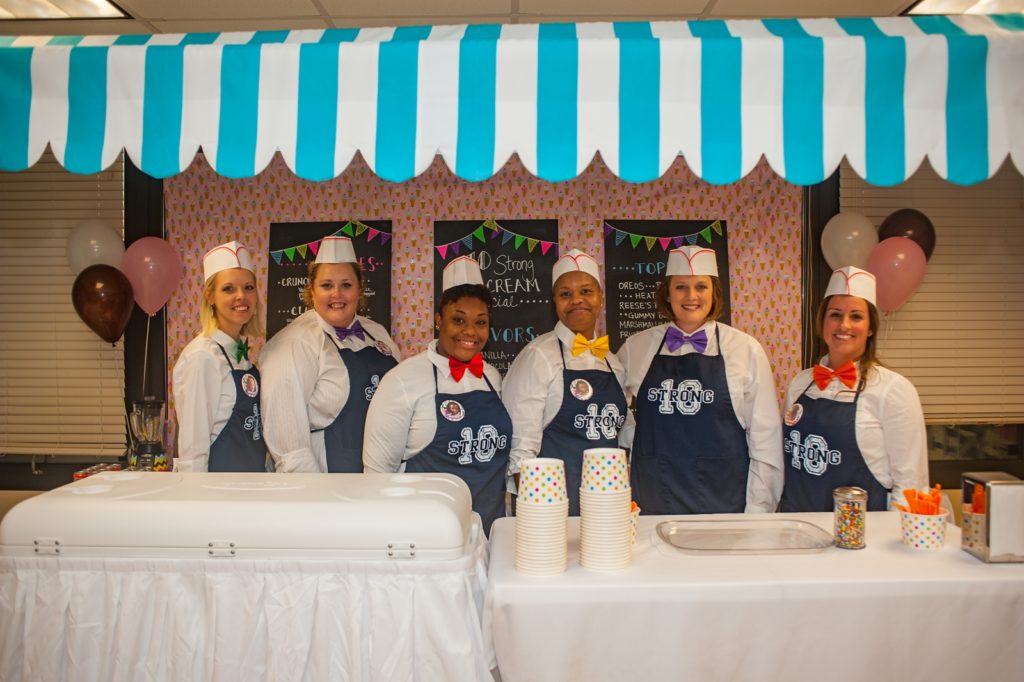 “It was very isolating,” McDowell admitted. “Every day was kind of like groundhog day.”

She started meeting other parents on the floor and got to know many of the nurses. Like many of the moms in the 10 Strong group scooping ice cream for families, she refers to the hospital as her second home and comments that many of the parents and nurses have become as close as family to her.

As any mom would, McDowell began to realize as her daughter was finishing up treatment how many memories the patients and their parents and siblings sacrificed during their time at the hospital. So she became determined to give the families on the floor special moments throughout their time there, starting with a Christmas Eve party she organized three years ago.

It was at that holiday party that McDowell got to know Nicole Howard and her family. Howard recalled how her kids were touched by the thought the 10 Strong group members put into the occasion. The group members purchase matching pajamas for all the patients and their siblings, decorate IV poles like Christmas trees, sip hot cocoa and roll out a carpet on the sterile hospital floor to watch classic Christmas movies together.

“It’s really important that we simulate a real Christmas,” McDowell said. “These are years in the lives of kids they would normally be making these kind of memories at home. But it’s not like they’re going on family vacations or going to the park or having birthday parties. They’re here.”

Last Christmas, Howard was at the hospital with her husband and six kids because one of her youngest twins, Blake, was fighting leukemia.

Blake was diagnosed at 5 months old. The family knew immediately he would need a stem cell transplant, the only known cure. He got the transplant last December and the family did their best to celebrate Christmas in the hospital. After 123 days of treatment, Blake was released only to relapse a month and a half later. He died March 26 and Howard said she hasn’t missed a Wednesday night since. 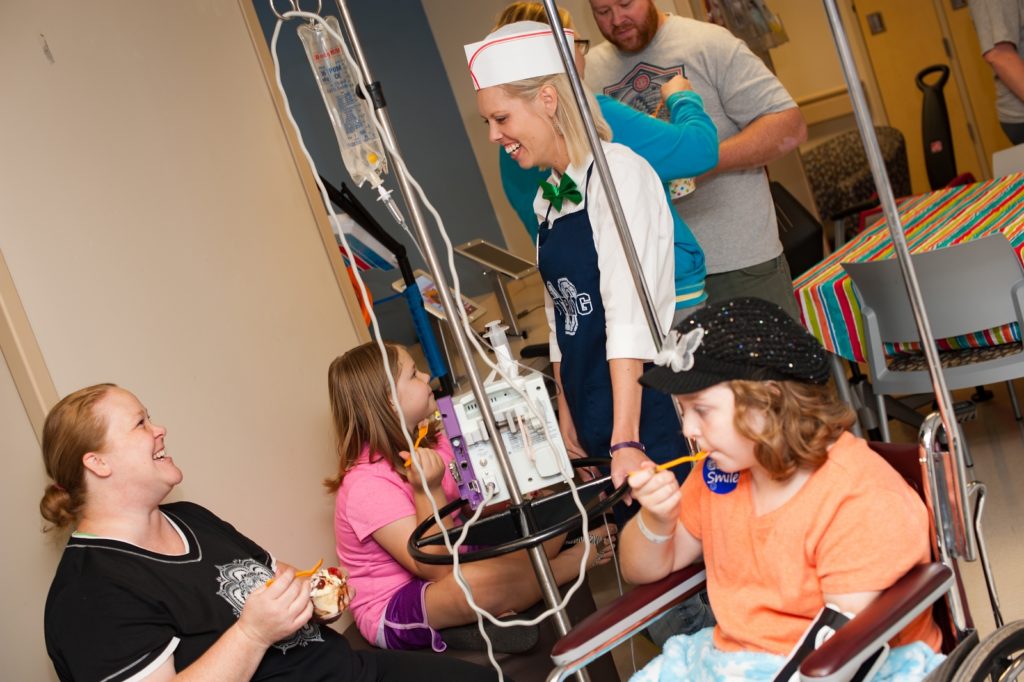 “I was so isolated,” Howard said of her time at the hospital with Blake. “For months I swapped out every other night at the hospital with my husband and the only people I ever saw were the nurses on the floor. These people really are my family and once you come into this world, it just makes sense to stay part of it.”

Blake spent much of his time in a special wing for stem cell patients, unable to even leave the room. Still, the 10 Strong ladies were there. On waffle night or ice cream night, they bring menus by the stem cell rooms to let patients and their families order something special. For some of them, it’s the only time of the week to eat something other than hospital food. On movie night, the 10 Strong women take flyers to the patients who cannot leave the room and let them pick from the menu of new releases. They then rent the movie and bring back into the room along with snacks.

“Once you’re in this world, you never go back to normal,” McDowell said. “After this experience, you feel a duty and an obligation to the people up here.”

While all the moms in the group believe strongly that their efforts boost the moods of all the patients on the floor and their families, a big element of their efforts is to simply raise awareness about childhood cancer.

The Pediatric Cancer Foundation reports that 43 children per day are diagnosed with cancer. That’s one in every 285 children facing a cancer diagnosis. Yet only four percent of federal government cancer research funding goes to children. The women in 10 Strong are determined to raise awareness and put more funds into curing cancer among children.

“Everyone in here is just waiting for another trial that could possibly save their child,” McDowell said. “When you’ve been on that side of things, you do whatever you have to do to throw money at this cause.”

Even shave your head. Jordan Keith, another 10 Strong mom, met McDowell three years ago when they shaved their heads together to raise money for St. Baldrick’s Foundation. The volunteer-powered childhood cancer charity funds promising research to find cures for kids with cancer. At the time they shaved their heads, Keith’s son, Charlie, was in treatment. Like Mia, Charlie was also diagnosed with neuroblastoma. St. Jude Children’s Research Hospital reports neuroblastoma is the most common tumor in children younger than one year old with 800 new cases diagnosed annually in the U.S.

The 3-year-old was in treatment 150 days before going into remission. After six blissful months, he relapsed. Charlie died in September from complications of his cancer treatment. Amazingly, Keith never stopped helping other families at the hospital. 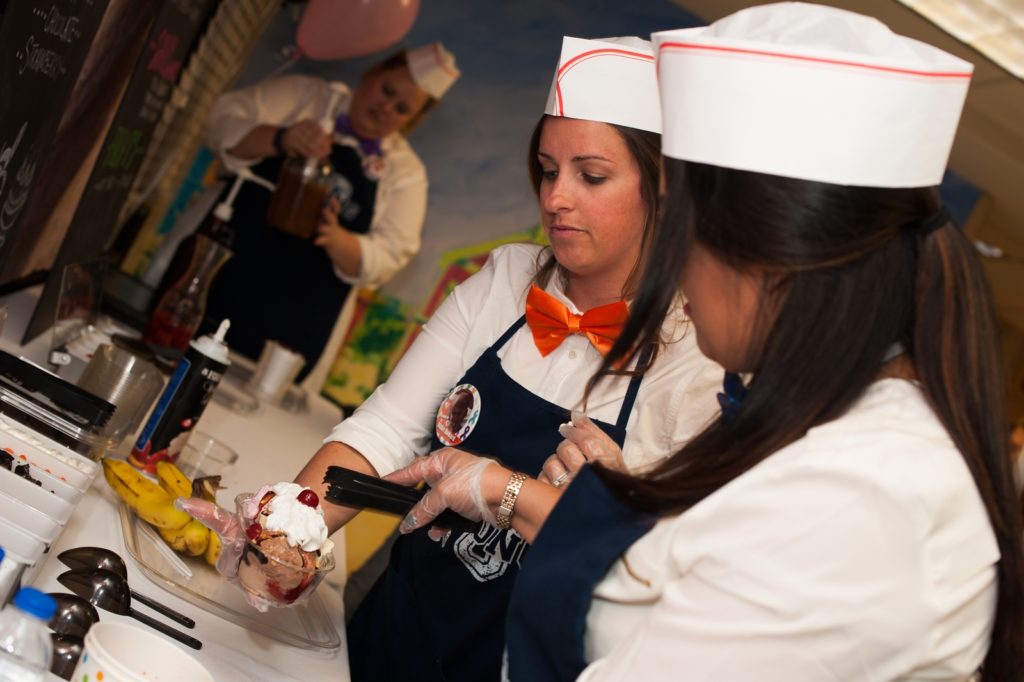 “This is my therapy,” she said. “I came back my first week after Charlie died. You can’t leave behind the families that need you. This was my second home for a long time. You don’t just leave.”

Like every mom up on the 10th floor, Keith has a lifetime of friends and family members outside the hospital.

“I call them my B.C. friends-before cancer friends,” she said. “I still have them but you lose communication when you put your whole life on hold for treatment. I can’t blame them, but that’s why it means even more to be serving these families up here. I feel a lot of responsibility.”

McDowell has noticed among all the moms—those who have lost children to cancer and those with kids who survived—that bringing the Wednesday night celebrations to the hospital is a way of healing, providing hope and honoring the memory of kids who died too soon.

The weekly ice cream night that’s being celebrated on this particular evening was inspired by Charlie, in fact. Keith, with a pin proudly displaying Charlie’s bright smile peeking over her apron strap, said ice cream was her son’s very favorite food. She knows Charlie would be proud that she’s serving up sweet treats to other patients.

To keep changing lives, the group relies on donations from local individuals and businesses. They recently threw a birthday party for a 2-year-old boy on the floor that was generously catered by Big Truck Tacos with a free cake supplied by Icing Smiles.

At this year’s Christmas Eve party, Katiebug’s Shaved Ice and Hot Chocolate will bring free cocoa up to the 10th floor. As long as there are people willing to donate goods and services, 10 Strong is committed to growing their presence on the 10th floor.

“If someone contacts me, I’ll show them a way to help,” McDowell said. “We had a carpet store donate the carpet for movie nights. A concession stand store donated stuff to make the snacks. Call me and I’ll tell you how to help get a smile on these faces up here.”

Whether the donations come in or not, Keith, McDowell and Howard all agreed there’s no stopping 10 Strong from hosting weekly parties and special events.

“Our mission is to improve the morale for these kids and their families,” McDowell said, “and we’ll do absolutely everything we can do to make that happen.”

[Editor’s Note: To learn more about this group and make a donation, visit www.facebook.com/10strongforacure.]